A rock star and a Findhorn legend… During the time Mike Scott, founder and lead singer of The Waterboys, was living in the Findhorn community, he was called on to help co-founder Eileen Caddy to the Sanctuary in the mornings. What developed was a gentle and treasured ritual. Here are his memories of Eileen and the Main Sanctuary of the Findhorn Foundation, which sadly burned down in April 2021.

When my wife Janette and I moved into our new home in Findhorn in 2002 we became Eileen Caddy’s next door neighbours. We both knew Eileen slightly.  Several years before, her spiritual work had been my reason for going to Findhorn in the first place, and I’d attended her workshops, and Janette had been a staff member of the Findhorn Foundation, but we hardly knew Eileen at all socially.

As fate would have it, a few weeks after our arrival Eileen’s carer, Linda, went on holiday, and I was asked by Eileen’s friend Rosie Turnbull if I would take on the job of accompanying Eileen to the Sanctuary every morning at 6am.

At this time Eileen was 85, and not very firm on her legs. Her eyesight was poor, and on pitch-dark north of Scotland mornings she needed a friendly arm.

So began a three-month period during which I rose at 5.15am every morning, opened up the Sanctuary on the dot of 6 (which duty consisted of opening the curtains and a window and placing two plump cushions on Eileen’s favourite chair), and then walked the 30 or 40 yards to Eileen’s house, Cornerstone, to collect her.

I would give my familiar knock, open the door a little, call ‘Hello!’ – and a cheerful sing-song voice, like a child playmate’s, would reply from within: ‘I’m com-ing!’ 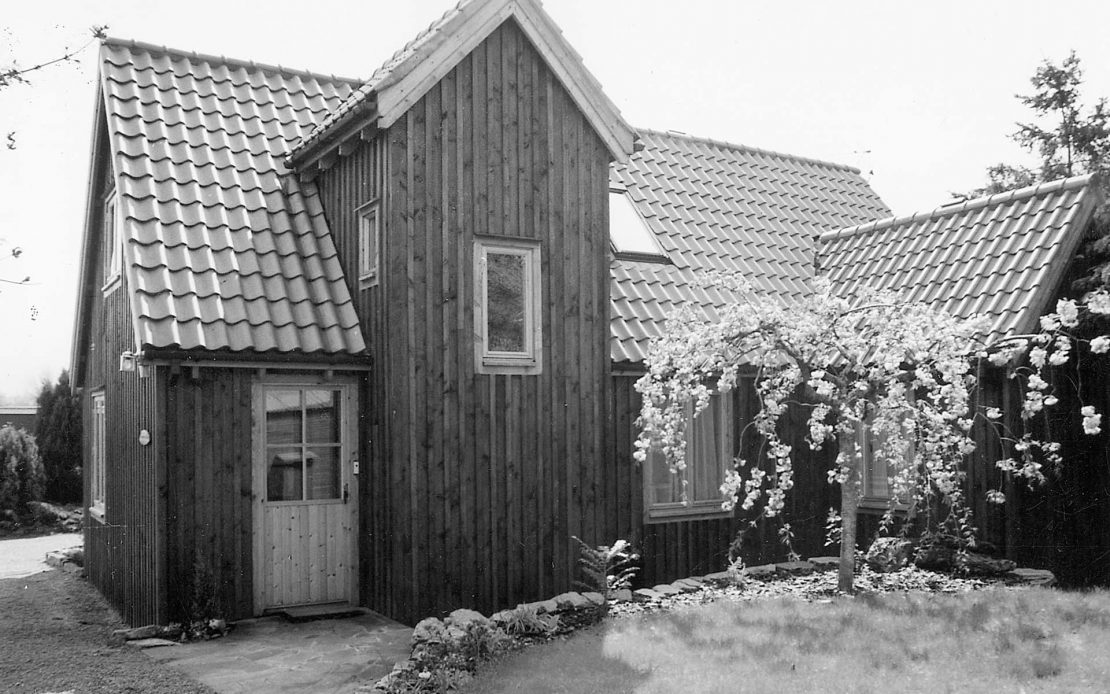 Cornerstone, built for Eileen Caddy toward the end of her life

In moments Eileen would appear, well wrapped up and fresh as a daisy, always immaculately presented, with her smart white umbrella as a walking stick, and, with me taking her arm the better to steer her gently, off we would go, whatever the weather – wild and windy, snowy and crystalline, or just plain cold.

Eileen’s white cat, Crystal, would walk rather magically before us, and our funny procession would wind among the chalets and trees, stopping briefly at the community’s General Office to open it up for the day (Eileen’s job, for which she brandished a cluster of keys), and then the last few yards to the Sanctuary.

Crystal wasn’t allowed in (Eileen would scold her robustly on this point and even, on occasion, lovingly clobber her with the end of her brolly), and so would wait loyally, paws tucked in, on the footmat outside the Sanctuary door. 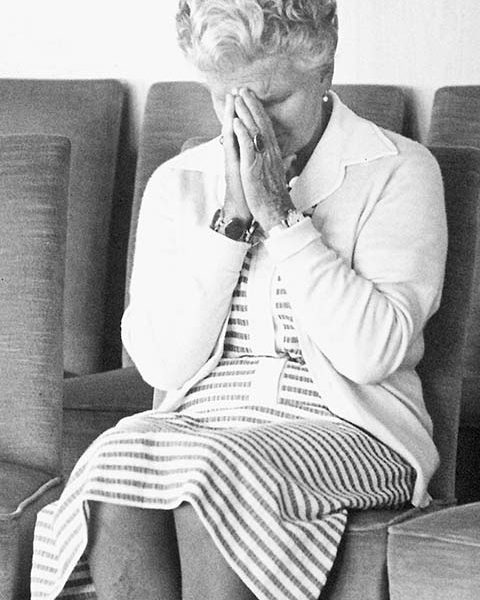 Eileen Caddy in the Sanctuary

In the vestibule Eileen would slip off her shoes, a well-practised action that took her approximately one nanosecond, push open the inner door, pick up one of the books of her spiritual guidance from the shelf (her favourite was The Living Word), and sit down in her chair. (She explained to me once that every few months she would change chairs so as ‘not to get into a rut’.)

In the Sanctuary she changed mode, swiftly adopting an attitude that seemed to be a mixture of dedication, great humbleness and a kind of rapt obedience. Seated, she would read a passage of guidance quietly to herself, and then close her eyes and begin to meditate.

I would sit two or three seats from her, close enough to be a supportive presence, and on hand to help her rise after the meditation, but not close enough to be in her space. Other community members would arrive and at 6.30 the silent group meditation would begin with the ringing ‘dong’ of the Tibetan bowl.

An hour later a reciprocal ‘dong’ on the bowl signalled the close of the meditation, and I would make sure I was ready when Eileen started to get up.

She never once waited for a helping hand – her willpower was too strong for that – but she appreciated it nonetheless. I would have to be fast in the vestibule getting my shoes and coat back on, for if I lingered, she would be out the door and halfway down the icy steps without me.

Outside Crystal would be waiting for us, and our little procession would retrace its steps back to Cornerstone. Dawn would be at hand, and the birds beginning to sing, with an intolerably beautiful red sky breaking over the low roofs of the community buildings, and Eileen would chat to me; never anything far-out or cosmic, only down-to-earth comments like: ‘That meditation went very quickly’, or often simply ‘What a beautiful morning’.

I’d leave her at her door. She would always say ‘Thank you, Love, bless you’, and I’d head back home. Though I was relieved of my duties a few months later when Linda returned, Eileen and I remained friends, and it was my great privilege to visit her daily, when my travels allowed, during the last few years of her life. 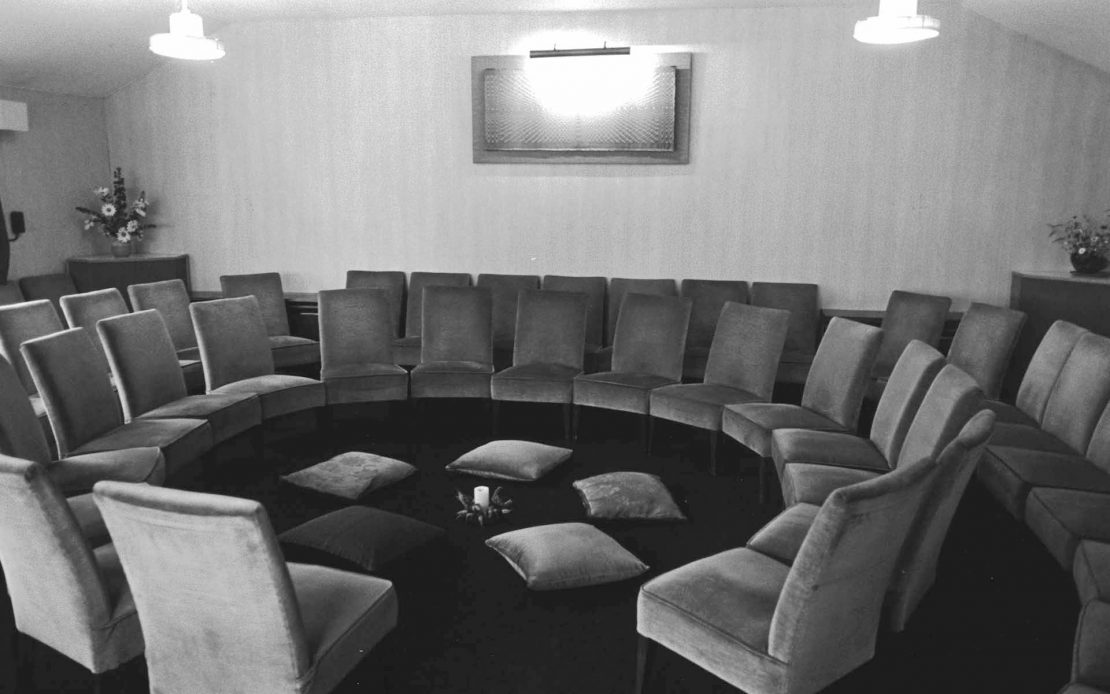 The Sanctuary – destroyed by fire in April 2021 – was a clear instance of co-founders Eileen's guidance and Peter's acting on it.
HeritagePeople