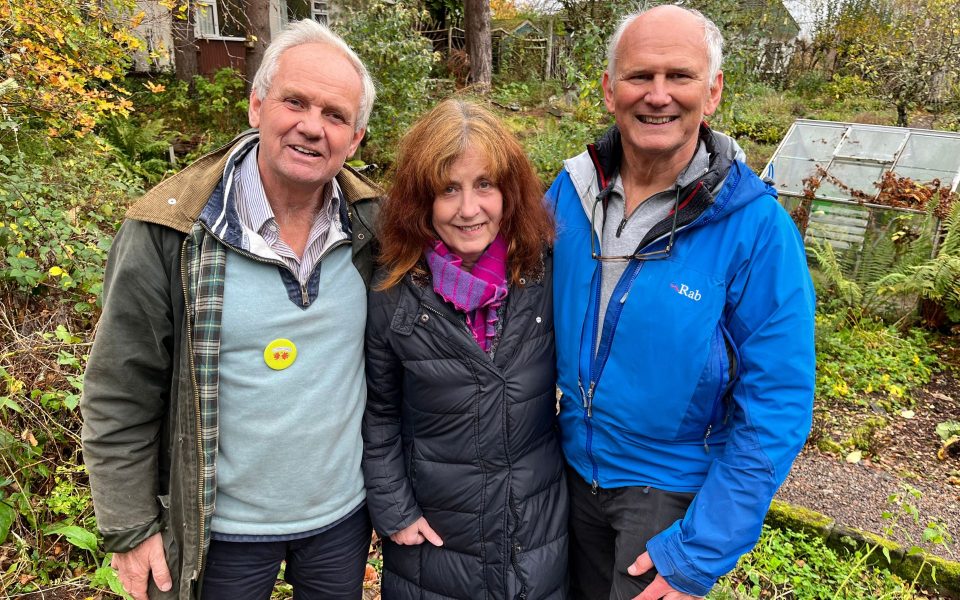 Ruth with Jonathan and Christopher Caddy, who grew up together.

The lawned area in the Original Garden wasn’t always empty; in the early days of the community a second caravan was parked there. This was the home of three young children and their mother, Lena Lamont – a close friend of the Caddys and Dorothy who has had little mention in the Findhorn story.

It is astonishing that Lena has remained a ‘secret’ of sorts, despite so much being written about the community, including autobiographies of the famous founders. With her passing in May 2021, those who remember Lena and her presence in those early years, as well as the community today, can honour her as the fourth founder.

A special guest at the 60th birthday celebrations in November 2022 was Ruth Lamont, Lena’s daughter. At an opening event to celebrate the founders, Ruth told her mother’s story to a packed – and surprised – Universal Hall audience. A first clue to the moment was the beautiful playing of the Skye Boat Song – a reference to Lena’s roots as a crofter’s daughter on the Isle of Skye. 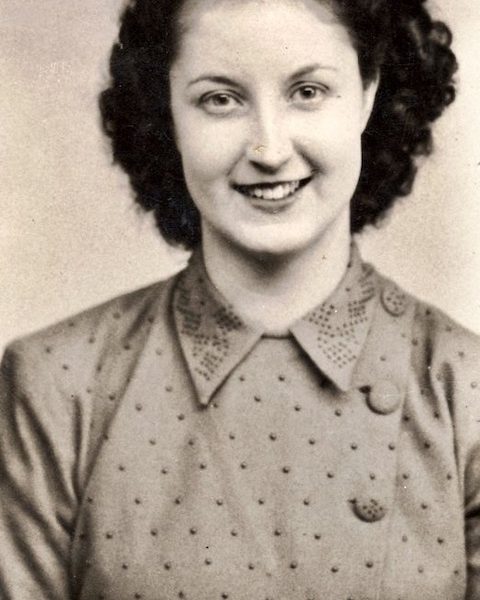 Lena met Peter Caddy long before the time at Cluny Hill Hotel.
‘Peter came to stay as a lodger at my Grandmother’s house in the West End of Glasgow,’ said Ruth. ‘It was in 1956, and he was a Kleeneze salesman. He was a good lodger – well-mannered and educated. The Lamont home was characterised by traditional Highland Hospitality. Peter liked to join the family for meals and conversation in the large kitchen rather than be on his own in the dining room.

‘One foul night Sheena [Peter’s former wife] turned up unannounced. My Mum warmed her with hot soup and they chatted. They had common ground as Sheena knew the Highlands and Islands well, being the daughter of George Govan, leader of the evangelical Faith Mission.

‘Sheena stood in the kitchen and sang a very moving Gaelic lament, which endeared her to Lena who was a fluent Gaelic speaker from the Isle of Skye.

‘Months later, due to the desperately unhappy time Eileen had on Mull, Peter phoned my Grandmother’s house and asked if they could come and stay. He, Eileen and their young boys, were made very welcome.’

Peter and Eileen already had a strong spiritual practice, and Lena and her husband were invited to join the group. 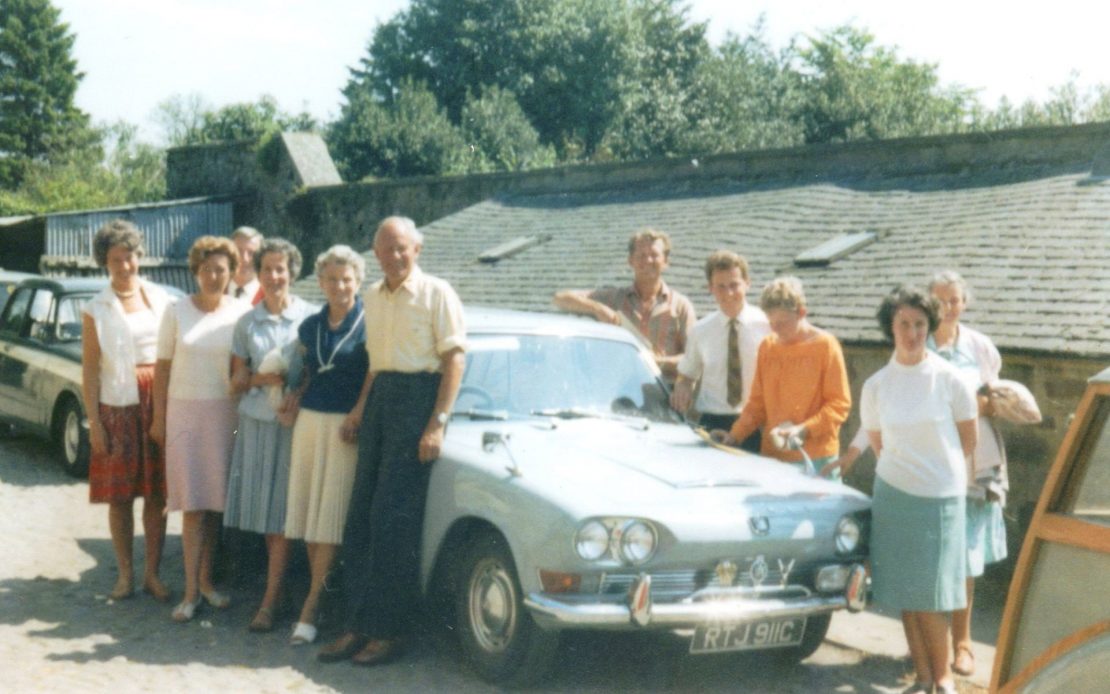 June 1967: The four founders and community members at Donavourd Weavers, Pitlochry. Lena is far right at the front. At the car are, from left: Dorothy, (unknown, unknown), Joannie, Eileen, Peter, Dennis Orme, John and Jan Willoner, Lena, (unknown). Donavourd is where the original sanctuary’s Sunrise Panel weaving was created.

‘Sheena and my Mum were both raised in strict Presbyterian communities but they broke away in favour of a more mystical spiritual path. My Grandmother, who came from a conventional church background, did remark to my Mum that she thought they had a “strange religion” – as did the press and many others!’ said Ruth.

A year later Peter got the job of manager at Cluny Hill Hotel, and the Lamonts followed, moving to Findhorn village and living in a cottage called Willowbank.

Ruth was born in Leanchoil Hospital in Forres.

The Lamonts also moved to the Trossachs, and stayed on for a while in the Gardener’s Cottage after Peter, Eileen and Dorothy left so suddenly.

‘It was the severe winter of 1962 and we felt very isolated. Then Peter picked us up and drove us on the long and winding road to Findhorn,’ said Ruth.

‘I thought we were going back to our cottage in the village. I was surprised to wake up the next day and look out the caravan windows at “The Hollow” as we called it, the grassy patch of ground where the garden is today.’

In those early days the group – not yet a community – was very small.

‘That suited a shy person like Lena. Life was really quite simple. The adults would gather in the Caddy’s caravan at lunch and in the evenings for “peace” or the “time of quiet” and they would then pen or discuss their reflections, revelations or visions. They were on what Caroline Myss has called the “innernet”! In meditation they sent love and light to far-flung places on a Network of Light.

‘We children kept out of the way and did our own thing. Visitors came, some settled and made their various contributions to the beliefs or work, which Peter called Love in Action.’ 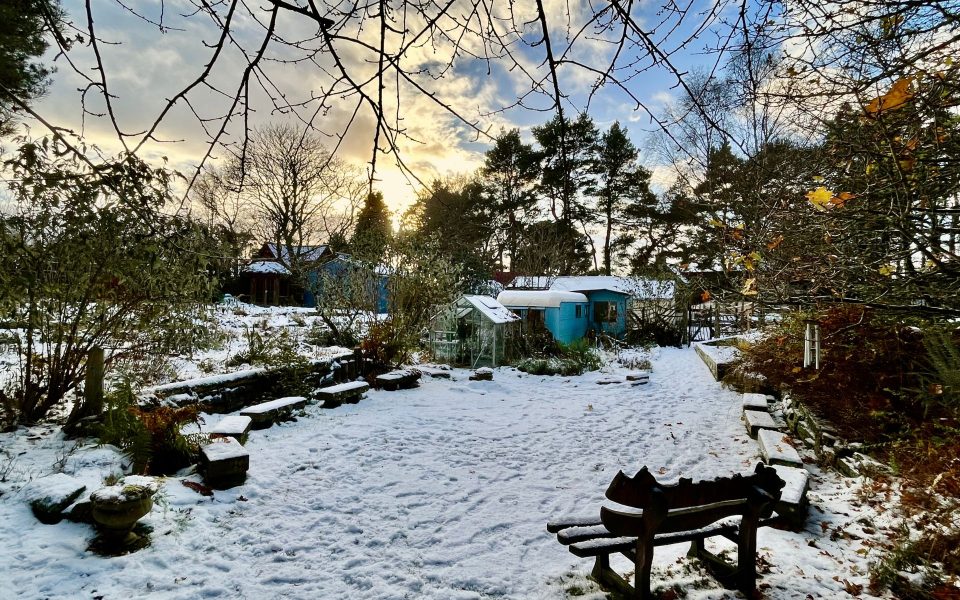 The Lamont's caravan was in the central space in the Original Garden – they arrived in snow, like this image from December 2022.

As the children of both families grew older and needed more space, the Caddys moved into the bungalow now called Genesis, and the Lamonts to Rose Cottage in Pineridge.

‘Pineridge at that time was very bleak and Lena missed the security of the caravan in The Hollow, which now had a reputation as The Findhorn Garden. As the community grew larger and my brothers and I left the nest to study, Lena felt it was time to move on. She lived out her days in Edinburgh but made a few return visits. She kept in touch with Eileen and Dorothy until they passed away.’

Lena was self-effacing, reserved and gentle, a person who avoided publicity. So it’s very good now to be able to pay her proper tribute.
Jonathan Caddy, who knew Lena from the start, added: ‘Lena was one of the four founders who together pioneered this bold but simple experiment of taking time to connect with spirit, to let it guide their lives and see what might happen.’

At the Birthday founders event, Ruth invited Rev. Dr. Richard Frazer to share some beautiful words from Lena’s eulogy, as a message to our community: ‘There is a phrase that Ruth has used several times when we’ve talked in relation to her mother, one that Lena used as a reassurance to others: “You’ll see my light.” Perhaps more than ever in her passing, we will see her light still.’

Portrait of Lena Lamont used with thanks to Ruth Lamont