Award-winning filmmaker Maria Craig recalls the moment when the seed of her new life was planted: ‘I was sitting in the Community Centre at the Findhorn Foundation, it was 1997 and I was in the middle of a three-month programme called Essence of the Arts.

‘At the time I was living in the Caribbean and working in training and development. Someone asked what I would really like to do with my life. I answered without thinking: “Make a film,” I said. “Well then, why don’t you?”’

Maria first heard about the Findhorn Foundation around 1982 while living in Abu Dhabi – it was a chance encounter with a woman from New Zealand, who was on a stopover on the way back from Scotland.

Maria was fascinated to hear about her visit to this Scottish spiritual community – despite being born and bred in Glasgow, Maria had never heard of it. She couldn’t quite believe such a place existed in the north of Scotland.

On her very next trip home to visit family Maria booked onto Experience Week, the Foundation’s signature programme – over 30,000 people have taken part over the past four decades.

Her first memory is walking past the Park kitchen, seeing people cooking and dancing at the same time – and she fell in love with the place on the spot.

With her three-year-old son, James, she enjoyed every minute of Experience Week, from working in the kitchen, washing up with Wanda the famous dishwashing machine, to meditating in the Sanctuary.

Each time she returned to Glasgow to visit friends and family, she made a trip north for another taste of the Findhorn Foundation. This was in sharp contrast to her glamorous expat life, living in Abu Dhabi and later on in the Caribbean, and working around the world in embassies.

Amaya Rodriguiz McGregor (centre left), one of the young people interviewed in Growing Up Green, with producer Maria Craig (centre right) and film crew behind - at the main doors to the Universal Hall

In 1997 Maria was drawn back to the Foundation for a life-changing programme called Essence of the Arts. ‘It was a rollercoaster time,’ she recalls. ‘It was time to spend with the Inner Self while also focusing on creativity. I loved the programme and made some great friends – I’m still in touch with some of them today.’

Maria learned how to Salsa on the programme, and for her graduation ceremony, danced a Salsa in the Universal Hall to The Time of My Life from Dirty Dancing.

It was also a time of exploring film through a local filmmaking group called Moving Picts, who took a film to the Edinburgh Festival.

This ignited Maria’s passion for filmmaking, a far cry from her career at the time, running a very successful training and development company.

It was also around this time that a seed was planted to own a house on the beautiful Findhorn Bay, but she couldn’t afford it. (However, this dream was realised in 2000 when Maria and her husband built a beautiful eco-house on the bay.) 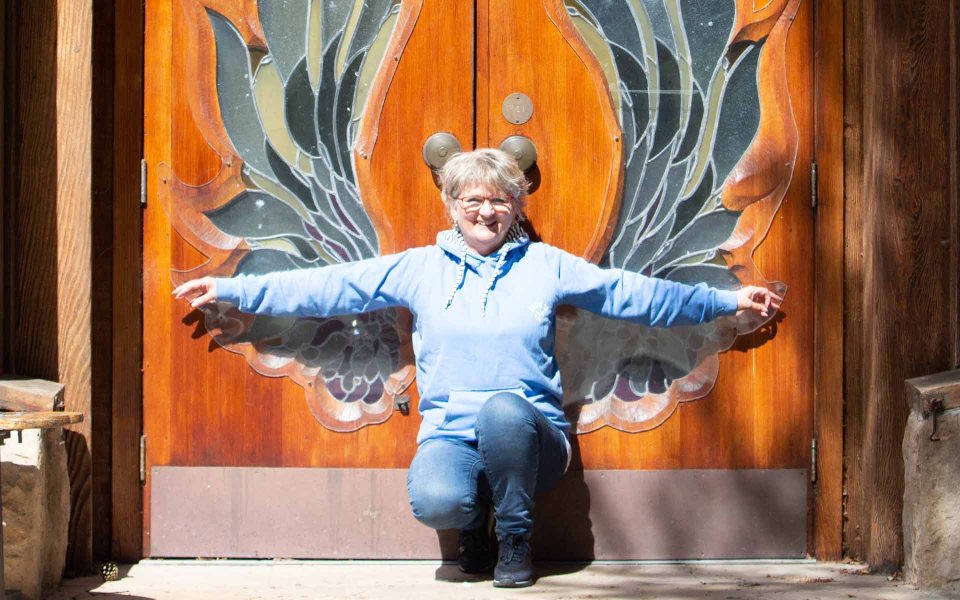 Maria Craig at the 'angel wing' doors of the Universal Hall, where part of Growing Up Green was filmed

Part of Maria’s journey with the Findhorn Foundation has been to visit here, plant seeds and then watch them grow. She studied NVC, Emotional Intelligence and psychology courses here at the Foundation, and was inspired to create innovative training courses that she delivered all over the world.

One was a course called Managing from the Inside Out, which at the time was working with the very new concept that managers must know themselves before they can manage others.

After selling the training company and ‘retiring’ in 2012, Maria decided it was time to focus on herself. As a mature student in her 60s she bravely went back to university at Stirling to study Spanish and European film.

But a year into the course she decided it was too academic, so she took a chance and knocked on the door of the university’s film and media department.

She told the person who answered the door that she would prefer a more hands-on course – and that was that. She transferred to a Film and Media degree, won the student of the year award out of 200 students and then went on to a Masters in Screenwriting in Edinburgh.

Her dissertation film Hear Me Now was the winner of the Best Factual Award at both the Scottish and UK Royal Television Society Student Television Awards in 2018.

At the back of her mind remained the dream of returning to the Foundation and community and making a film. Growing up Green is the realisation of that ambition. It features three very different young people who grew up here in the community, who share their diverse stories, the highs and lows of their journeys and what they see now as they look back.

Coming full circle, it also features the Universal Hall, where Maria danced in her Essence of the Arts graduation ceremony 24 years ago.

Ruby Wax, a firm friend of the Findhorn Foundation, has been re-evaluating her life...
MindfulnessNature

The trending urban concept of 20-minute neighbourhoods can learn a lot from ecovillages – and Findhorn’s ecovillage could be an inspirational prototype.
Ecovillage
Next Article