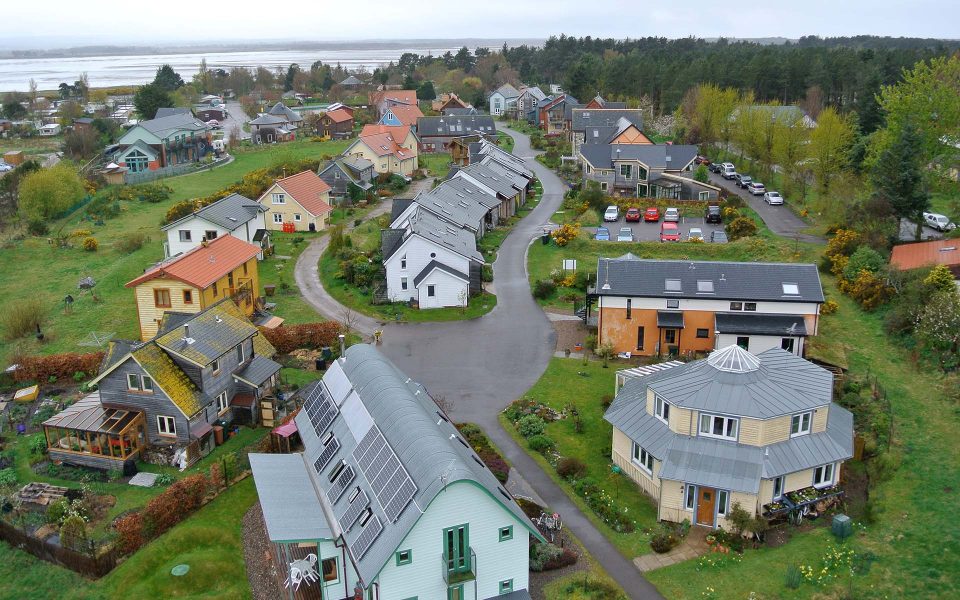 The Findhorn eco-spiritual community is 60 years old. The pioneering eco-settlement in the northeast of Scotland continues to play a leading role as a research and development centre for low-carbon lifestyles, pursued through a complex melange of dream and vision, dance and chant, technology and spirit, investigation and design, reflection and action, death and renewal.

Designated as a UN-Habitat model of Best Practice for holistic and sustainable living in 1998 and again in 2018, the Findhorn Ecovillage has been incorporated into the UN Habitat database of initiatives making outstanding contributions to improving the quality of life in cities and communities around the world (UN Habitat, 2017).

‘Some day, after we have mastered the winds, the waves, the tides and gravity, we shall harness the energies of love.’
Teilhard de Chardin 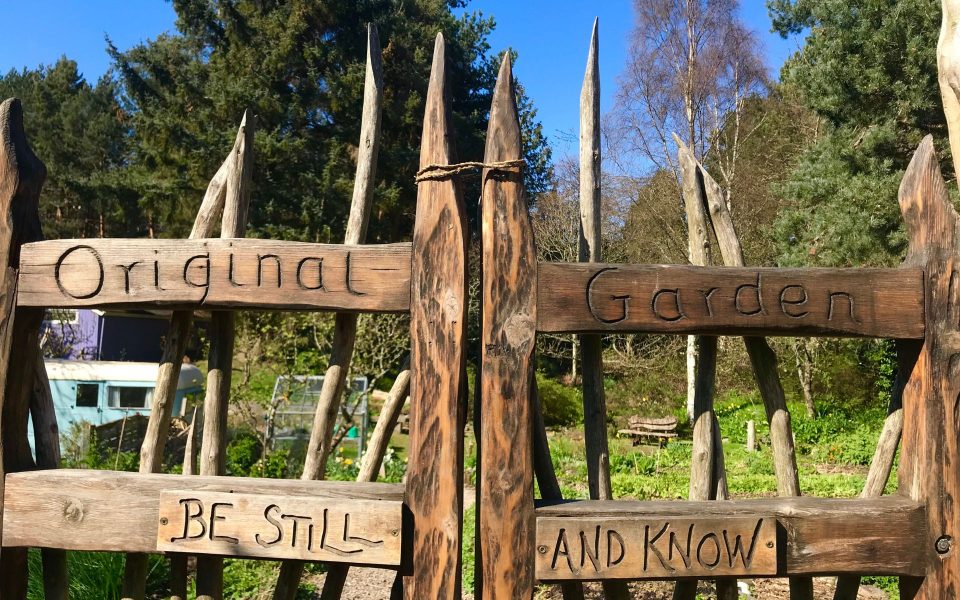 It’s 60 years since the community’s founders parked their caravan in what was afterwards called the ‘Original Garden’, planting the seed for what has become an international centre educating thousands from around the world.

Today, the Findhorn ecovillage continues to prototype solutions to the regenerative design challenge of our times in the fields of food production, energy systems, built environment, biodiversity remediation, re-localising economy and reducing carbon footprint. And most significantly, operating at the interface between the complex ecological and social systems and the interior dimensions of human consciousness.

‘You are living in the new where no books of knowledge have been written, where there is no pattern to follow. There is nothing hard or fast or cut and dried about this life. You can not tell from one day to the next what is going to happen. This is the most thrilling and exciting time; whole new vistas keep opening up. The unknown is becoming known.’
Eileen Caddy

The founders never wished to create other ‘Findhorns’. However, the simple transformative tool of ‘listening’ has been shared with the hundreds involved in redesigning our human presence on the planet.

Listening within, listening to nature and listening to one another has been the bedrock of the community. While Eileen Caddy was a revolutionary of her time, advocating for democratising access to ‘the voice within’ (rather than having to go through religious intermediaries), Dorothy MacLean was a wizard in listening to the intelligences of nature, and Peter Caddy a soul-full implementer of new patterns of things to come. 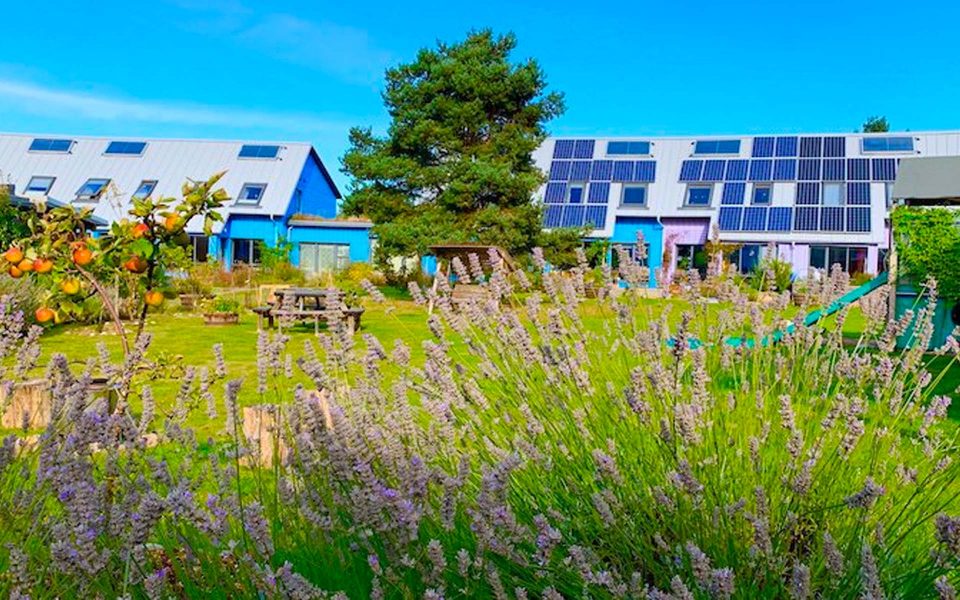 To date, 125 ecological buildings have been constructed in The Park at Findhorn to rigorous ecological standards. Indeed, the settlement has become famous for its recycled whisky barrel houses (CNN, 2017), the Nature Sanctuary – built from local stone and whisky barrel parts – and experimental ‘small’ houses and eco-mobiles.

New buildings have incorporated passive solar features and offer over two and a half times the insulation required by Scottish building regulations (Eco-arc, 2016).

The community has continued to experiment with innovative, energy-efficient construction systems, such as the ‘breathing wall’ which eliminates the need for a vapour barrier and allows the fabric of the building to interact with the indoor climate in a beneficial way (Talbott, 1993).

In 2008, Moray Art Centre was opened to showcase the visual arts, serving the region with the kind of art gallery exhibition space you would find in a big city, as well as several studios. With photovoltaic panels supplying electricity and ground source heat pumps providing heating, the arts centre is considered an exemplar of construction using local materials and craftsmanship.

Recently, Soillse, a new multi-generational co-housing zero-carbon development, was established. With their own biomass district heating system in place, these super-insulated houses are triple glazed throughout.

Furthermore, Soillse was the first building in the UK to use 425 mm thick insulated blocks. Even more recently, the East Whins co-housing neighbourhood broke new ground for a development on a ‘brownfield’ site (previously developed land not currently in use), providing 20 passive solar design, highly insulated houses. 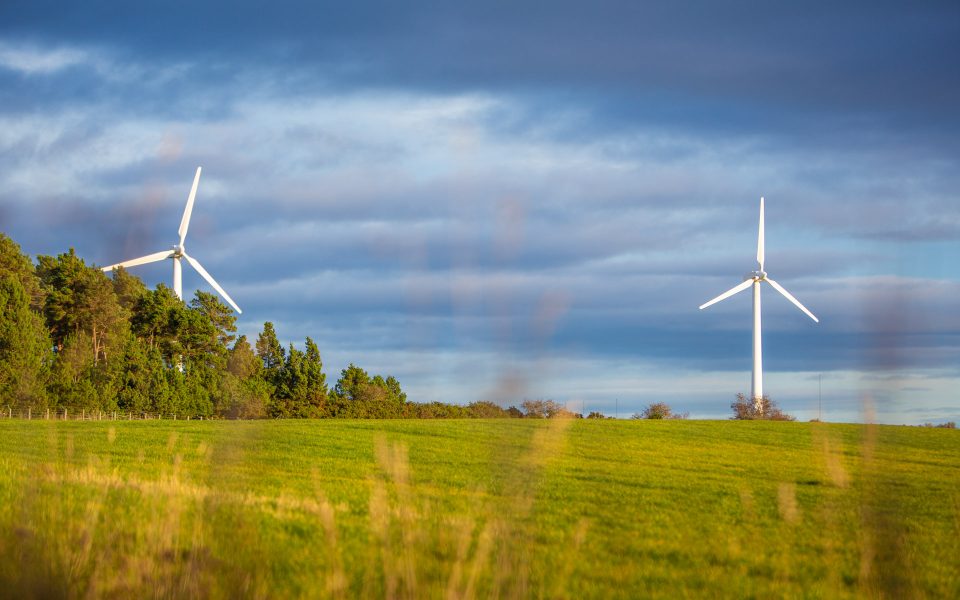 Over the past 30 years, numerous solar heating systems have been installed. In 2007 a carpool was established – it currently has 170 members and 15 cars, including 3 EVs spread across the local area (Moray Carshare, 2018).

The electric cars are powered by the ecovillage’s three windmills, and so are carbon neutral. Even when the windmills are not running, they source renewable energy from the grid. 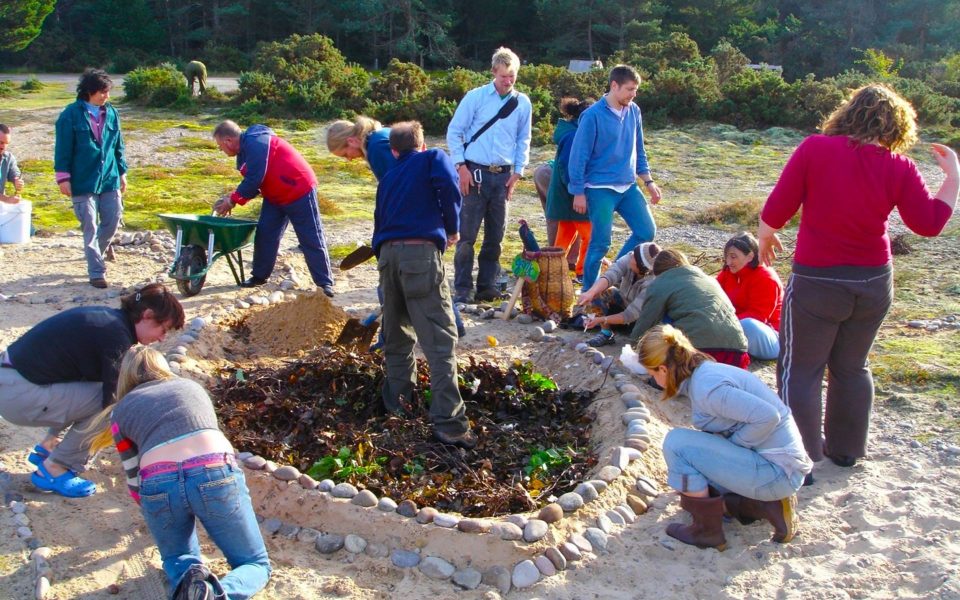 Over six decades, the settlement has improved its nature corridors, with woods, orchards and berry bushes separating individual areas, linking them to the surrounding landscape and providing biological enrichment and orientation.

The Findhorn Hinterland Trust promotes conservation, education and local community building, and provides recreational facilities and activities for schools and the wider area. It also manages a Green Burial Site, the first in this region of Scotland (Hinterland Trust, 2018).

With extensive gardens and a large food growing area, the settlement also has been promoting a wider range of right livelihood opportunities and supporting the development of local trading companies, including a Community Interest Company (CIC) retail business, the Phoenix shop, with an emphasis on organic foods and ecological/Fair Trade products (Phoenix, 2018).

Today, the ecovillage is home to a rich diversity of organisations: charities, non-profits, for-profits, co-ops and social enterprises; from freelance artists to solar panel manufacturers, from building companies to whole foods and craft shops, from a printing company to charities working internationally to promote agro-ecological food production.

The Findhorn experiment is a constantly evolving model used as a learning environment by a number of university and school groups, as well as by professional organisations and municipalities worldwide.

Furthermore, the ecovillage offers a rich field where the tangible and intangible values of place are not separate; they are rather – according to a definition by Algerian archaeologist Mounir Bouchenaki – two sides of the same coin. More precisely, thanks to the appropriate guardian spirit of the place, they are a natural unity. 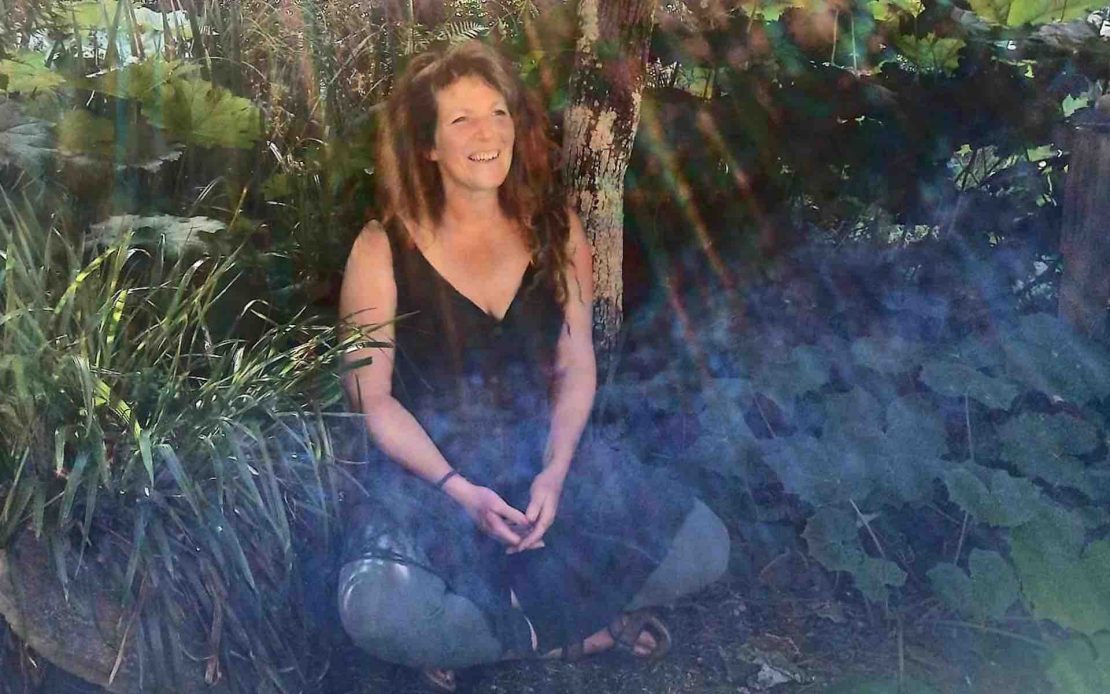 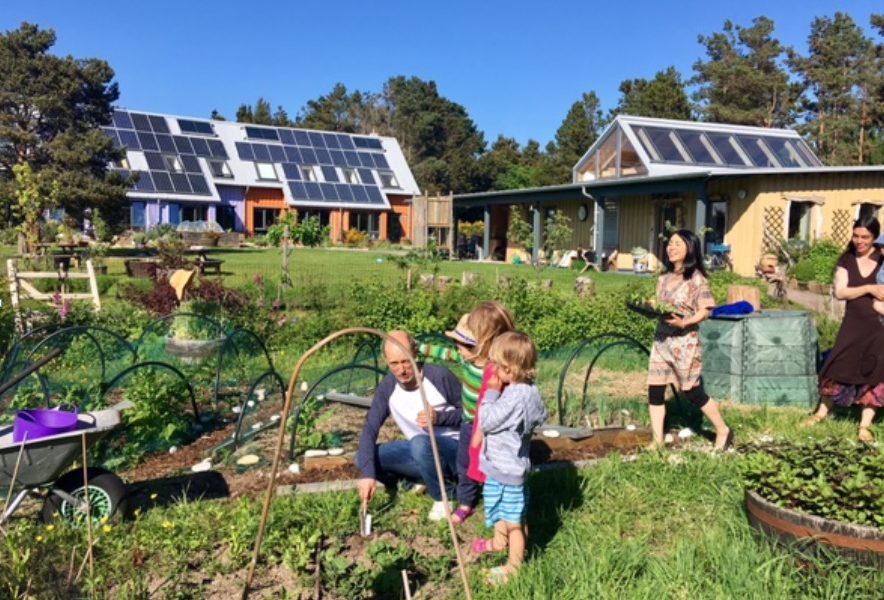 Recently, Findhorn Innovation Research and Education, along with Park Ecovillage Trust, were awarded a Just Transition Fund grant from the Scottish Government to undertake four feasibility studies, to address the ecovillage’s carbon footprint and its need for deep adaptation to climate change.

The four areas the ecovillage has received funding for research are:
* New renewable energy generation and energy storage to supply existing infrastructure and build capacity for low-carbon space and water heating in The Park.
* Master planning and upgrading The Park microgrid for electricity and water.
* New cost-effective and environmentally sound housing, particularly for younger members of the community.
* Organic food production and composting on a larger scale than currently possible, using greenhouses and ‘smart’ irrigation technology.
For more information on the Just Fund activities at the ecovillage contact [email protected] 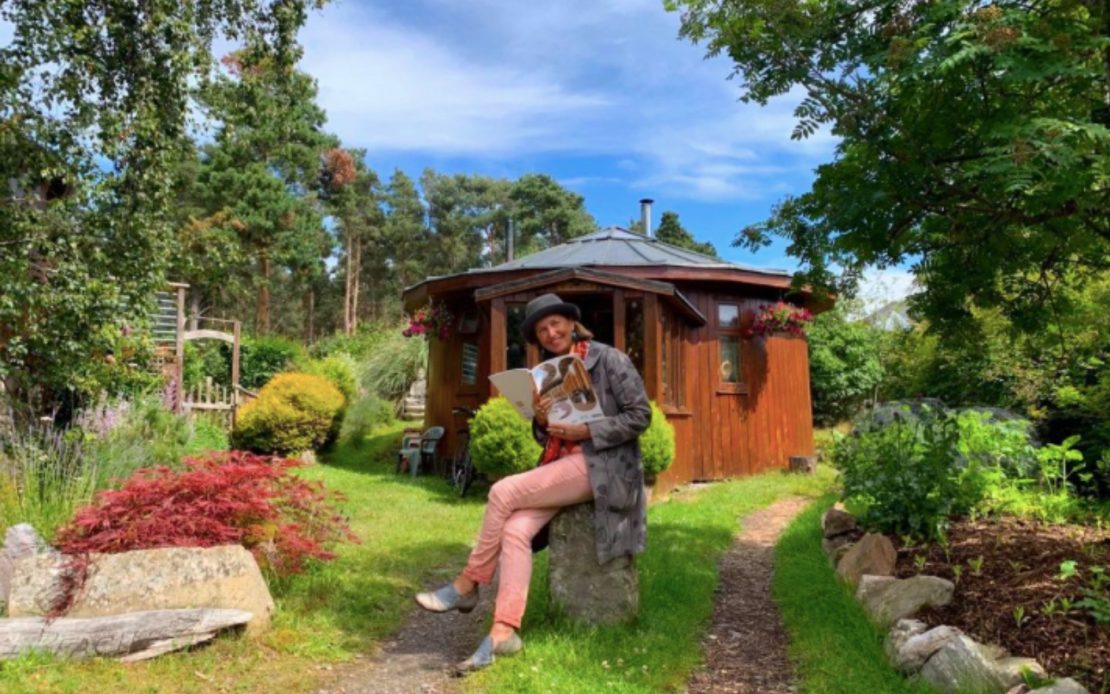 * May East is also celebrating 30 years since she arrived at the whisky barrel cluster to establish family and expand her world work rooted in the ecovillage. This article was originally published by May East here.

To stay up to date with new developments at the Findhorn Foundation, including Permaculture courses or Experience Week, outlining the community’s core practices, please visit Workshops & Events or join our mailing list.

The trending urban concept of 20-minute neighbourhoods can learn a lot from ecovillages – and Findhorn’s ecovillage could be an inspirational prototype.
Ecovillage

Expect bright ideas and fresh thinking: a learning collaboration between SCCAN groups at the Findhorn Ecovillage will gather knowledge to create a greener future.
EcovillageHeritageNaturePeople
Next Article